Our Favorite Feel-Good Stories About Nurses

Nurses have really stressful jobs. That much we know! On any given day they are doing so much for so many, which is why it is incredibly heartwarming to hear stories about amazing things happening to these real-life heroes. Here are five of our favorite uplifting tales of recent good fortune.

During the intense and deadly California fires in 2018, ICU manager Allyn Pierce drove through the flames to get to his post where he and other healthcare professionals helped the people left behind. Even after the hospital caught fire and they needed to move patients to a triage center they set up in the parking lot, he helped get everyone out safely.

Allyn’s car still ran, but it was burned on all sides. When his heroic story went viral, Toyota pledged to get him a new Tundra to thank him for his bravery. Here's some good news on Thanksgiving: Allyn Pierce, the heroic nurse I wrote about from the Camp Fire in Paradise, Calif., got his new truck! (See the above thread for his amazing story.) pic.twitter.com/G1Euqa7pDg

Liz and Gisele Find a Home With Each Other

Liz Smith, director of nursing at Franciscan Children’s hospital in Brighton, MA, grew up wanting to be both a nurse and a mom. Unfortunately she wasn’t able to conceive through in vitro fertilization after she found out her health insurance wouldn’t cover treatment. Then she met Gisele, an infant ward of the state, who had been hospitalized for months after she was born premature and with neonatal abstinence syndrome resulting from her birth mother’s drug use during pregnancy.

After first fostering her, Liz was eventually able to adopt Gisele and the two of them now share a happy and loving home together. Their amazing story was chronicled on the TODAY Show.

NICU Nurse Reunited with Baby She Treated 28 Years Ago

Intensive care nurse Vilma Wong has been working at Lucile Packard Children’s Hospital in Palo Alto, CA, for over 30 years. When she saw the name of a new child neurology doctor, Brandon Seminatore, she recognized him as one of the babies she treated after he was born premature at only 26 weeks.

“I was in shock initially, but overjoyed to know that I took care of him almost 30 years ago and now he’s a pediatric resident to the same population he was part of when he was born,” Vilma told ITV News. After the hospital posted their reunion story on Facebook, it was shared thousands of times. When this selfless group of NICU Nurses at Mercy Children’s Hospital in Missouri won $10,000 in the Mega Millions, they could have split their winnings and called it a day, but instead decided to make more of an impact and donate their winnings to two colleagues dealing with heartbreaking situations. They gave half to neonatologist Casey Orellana, who had been forced to cut back her hours to care for her two kids and husband who had recently been diagnosed with sarcoma cancer.

The rest of the winnings went to fellow nurse Gretchen Post to help her pay for her son’s funeral after he tragically passed away at just 17-years-old. “It was a little bit of relief that I would have some money to help with Jack’s funeral,” Gretchen told CNN. “It just came at the right time.”

ICYMI: When it comes to incredible #nurses, we hit the jackpot! Check out this @KMOV story about @mercysaintlouis nurses who gave their @MegaMillionsUS winnings to two of their own going through heartbreak: https://t.co/wo5wzppLgS #FacesOfMercy pic.twitter.com/iuRp4vNESA

Nurses Across America Get Baby Fever

There must be something in the water! All across the country there have been unbelievable stories of nurses who work together and all became pregnant around the same time.

Congratulations to all these amazing nurses and best wishes to you and your growing families.

We love reading, seeing and sharing uplifting stories about nurses. Follow us to see more feel-good content as well as other industry news. Have a story for us to include in our next blog post about amazing nurse stories? Please email it to us at hello@aahcs.org or connect with us on social:

Work with All American Healthcare

If you’re interested in working with us, it’s easy to get started. Simply download the AllShifts® app and use it to complete your registration. Once we confirm your credentials, you’ll be able to pick up shifts instantly. All American is constantly adding shifts at top-rated healthcare facilities and AllShifts® connects you to every opportunity.

Get Started
Back to Blog

Get more shifts faster with the highest pay in the industry

Does Your Facility Need Staff Now?

Sign up for updates and get the latest tips and information right in your email. 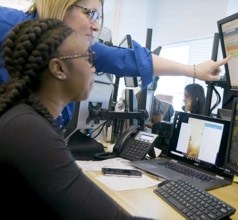